Mom had a hankering for seafood. We were in the Richmond Hill and Markham area all weekend so there were lots of options. She flip flopped between a Chinese buffet to a Chinese restaurant. I was pushing for something a bit more special, so once she settled on the latter, I did a few searches and found a candidate. We couldn't get a reservation for a decent time, so we went for the second option instead. 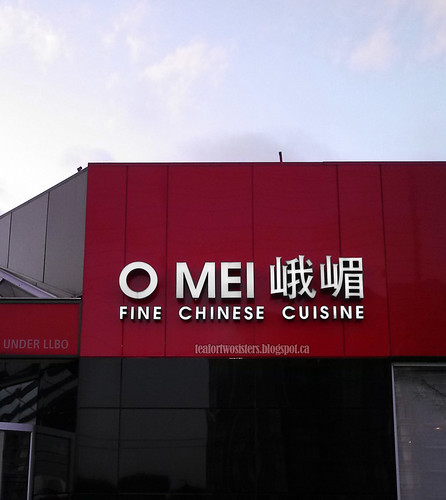 There were a few restaurants that served lobsters a few different ways. The place we chose, O Mei, just happened to be very close to where we were staying. O Mei's specialty breaking down a giant lobster of your choosing and cooking them into four different ways: steamed, stir-fried, deep-fried, and added into fried rice -- all with one lobster. Fancy, eh? Our family is used to the ginger and onion sauce. We actually make it at home. This was taking it to the next level. It was just what I was looking for.

We arrived a bit early for our reservation and were seated promptly to the rear corner of the store. The menus were all in Chinese. Luckily two people knew how to read it. Our server arrived and began talking really quickly in Cantonese. When we responded in Mandarin, he quickly stopped and immediately rambled on in Mandarin. When we asked questions, he replied so quickly, I started to think he was being timed. Jimmy ordered and the waiter disappeared with the menus but returned shortly after with a huge lobster.

"This is 8 and a quarter pounds", he said showing the live lobster. Upon first glance, the huge lobster looked closer to 10lbs. Mom thought it was too big as well, so we asked for a smaller one. The other lobster arrived. It looked much closer to 8lb but it was apparently 7.5lb. "We'll take it." We thought we were ready for what was to come. We didn't know exactly what or how many dishes we ordered. In hindsight, I'm not sure why we didn't just ask one of the waiters to be sure. With this uncertainty in mind, we sat in our chairs and O Mei began the ride. 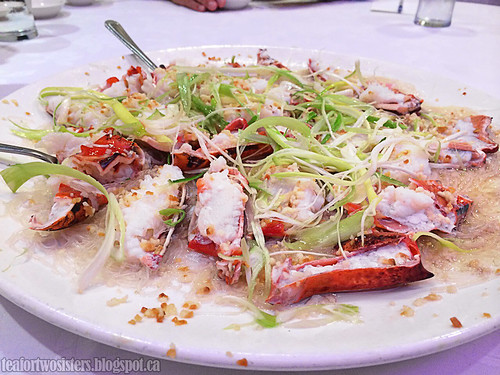 A lazy susan-sized plate of steamed lobster claws with garlic and bean thread noodles arrived. It was lightly seasoned and tame compared to how we normally prepare lobster. The noodles were great with the lobster. 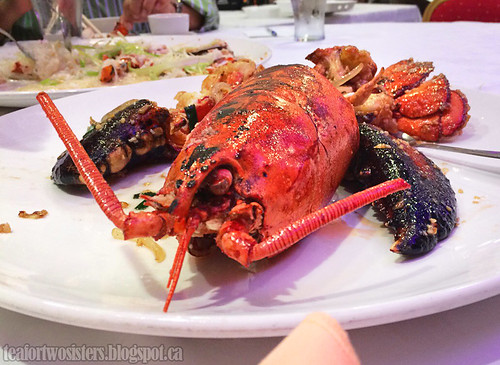 Next up, stir-fried lobster with Maggi. This was new to all of us and was a favourite. It was more on the sweeter side, which was a pleasant surprise. We were all so impressed with this rendition, we wished there was double the amount on the plate. Andrew took the head and picked it clean after failed attempts by Dad, Jimmy, and myself. There wasn't any of the guts aka tomalley (had to google that) though. The kitchen saved that for the last lobster dish. 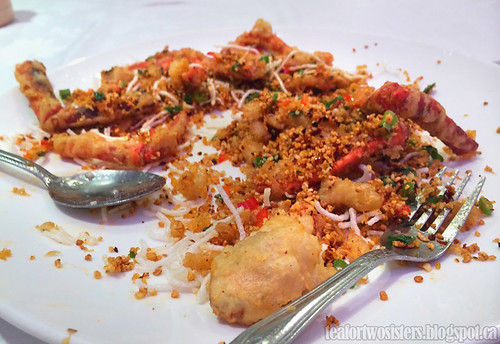 The waiter came to change our plates, which were already filled with empty lobster shells before the third dish arrived. The lobster was deep-fried and topped with chopped bits chilli, onions, noodle bits and lots of fried garlic.  This was reminiscent of the salt and pepper pork chops at the New Hong Shing. Mom couldn't believe they used so much garlic in this. 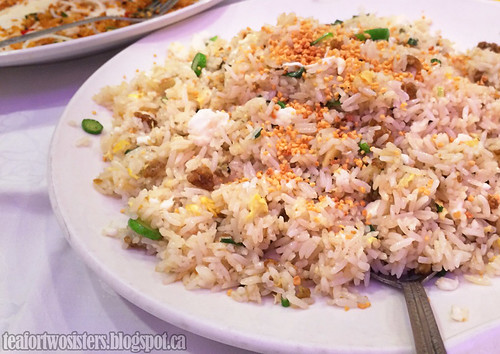 And the finale: Chinese fried rice with the tomalley. Why not? At this point, we all began to slow down a bit. Andrew was hilariously just getting started. While everyone else kept trying the dishes as they arrived, he kept his own steady pace. That was the end of our 7.5lb lobster. To sum it up, the fried rice and steamed dish were alright. It was all about that Maggi seasoned lobster.

I began to sip some more tea in anticipation for the desserts. We all were.

But then this happened.. 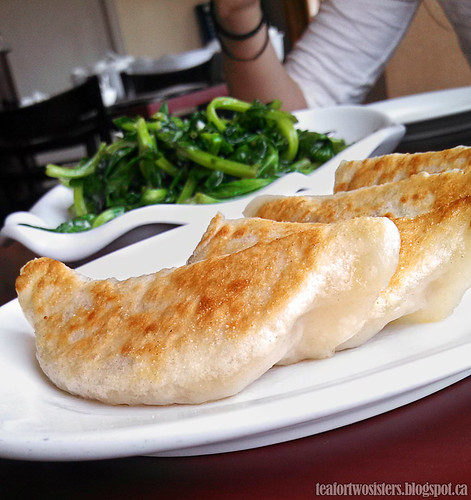 I just can't stay away from this beautiful restaurant. Just look at it. We've written about this at least five times dating back to 2009 (1st, 2nd, 3rd, 4th, 5th). I try my best to visit the Northern Dumpling Kitchen when I'm visiting Toronto and the Greater Area of Toronto (GTA). I used to try to visit House of Gourmet for my noodles but I haven't been there in over two years (!). During this trip back in May, I wanted to bring VN and have her try soup dumplings for the first time.

More after the jump »
Posted by Christine at 13:25 No comments:

On the Friday of my trip to Toronto, JT (our cousin) and I went to Pacific Mall (aka P-Mall) for lunch.  JT was really hungry so we snaked through the top floor in search of something to eat. It was a tough decision. On one hand, JT wanted noodles with soup but also something stir-fried. I wanted almost everything! There were so many options and so little stomach space. We split up and decided to meet back up at a table by Beard Papa's.


JT returned with Singaporean curry noodles. It was slightly spicy with a hint of smokiness from the wok. JT inhaled the first half and then hit a wall. I can't remember what the restaurant is called, but it's from the place on the right side of the noodle-pulling place. You know, that place.


Since we both like beef cheung fun, I got an order for us to share from Good Taste Garden, a place in the same area as Beard Papa's. We both found the noodles were underdone and the filling was lacking in both the taste and quantity. I do remember that their cheung fun was solid a few years back.


Despite knowing that shrimp wonton noodle soup would be better if we go elsewhere in the Markham area, I gave it a try. The shrimp wontons were juicy and plump, however, they didn't have that sweet freshness taste.

We were beyond full and had to bring the Singaporean noodles back home. We waddled back down through the mall and visited a few candy shops. I was hoping to find the elusive green tea KitKat that I've heard so much about. There are green tea Pocky in Ottawa but not the KitKat bars, I suspect it's because the KitKat bars are a Japanese product. Through the interwebs, I found out that they usually do carry the sweet treats in the mall.


I spy, with my little eyes... Yaaaa! There it iiiiiis!


We left P-Mall with a few goods and headed to Chatime nearby to decide what else to do with our day. At this point, our little tummies were still full but we fought on. I'm not sure if I ever talked about Chatime, but their milk tea is freaking remarkable! I'm was elated when I heard that they were expanding around the GTA. And now apparently they have one at P-Mall? What the what?


Large pearl milk tea with less ice and pudding pour moi. I actually only wanted pearls. The pudding was accidental. The convo between me and the guy, who manned the cash, went something like this:

Yeah, so I failed. "Can you put in less ice?" Gah! "Less ice" would've been fine. Lesson learned. It's actually a similar lesson to the "mo' sauce" thing. Anyway, we grabbed our drinks and sat at one of the empty tables. For a few minutes, we just stared at the drinks while cooling off in the AC. I didn't mentioned it before, but that day was hot and sunny!

The pudding was like a softer version of grass jelly. It was odd. I don't think I'd get it again. The milk tea on the other hand, I wanted to order another one after I finished it. Greed. Pure greed. But the way I saw it was that Ottawa bubble tea places pale in comparison to this amazing worldwide bubble tea giant. JT didn't enjoy her taro milk tea because they blended up taro which resulted in a grainy texture. She preferred the powdered taro version.


Here's one of the treasures that we left P-Mall with. Aw yeah!

We headed back to JT's place for the night and ended up watching stuff like Kings of Pastry on Netflix. Man, is Netflix ever addictive!

After an early routine ultrasound at the Civic Hospital, I needed breakfast or at least a snack. I wandered over to the cafeteria and was immediately drawn to the cookies, muffins, and scones. Unsure of what to get, I grabbed a cup of coffee first and then returned. Staring at all the options for a bit, I picked the cinnamon scone because it stood out. Remembering the scones I had in Toronto, I excitedly paid for my breakfast and tried to find a clean table that was well lit -- for the photos, of course.


I took a bite and began to chew. Not too dry, not too sweet. Woah! I bit into something sweet and slightly crunchy. Cinnamon bark? No, it's soft and sweet. And that's when I realized that there were cinnamon sugar pearls in it. I thought I had picked up a cinnamon raisin scone. This was so much better than that!


On my way home, I tried to remember if I ever made a tasty scone. There was this one time when I attempted to make buttery biscuits. They ended up turning into scones because of over mixing. Other than that, I couldn't recall making scones.


Then one rainy day, I woke up with the urge to eat cinnamon scones again. With a few quick searches, I realized that I actually had to buy the cinnamon sugar pearls. I'm sure I could've made something like it, but it would probably take too long. Instead, I thought about using Skor toffee pieces to make *drumroll* cinnamon toffee scones. Doooone!


I found a recipe, added more cinnamon into the dough, replaced the cinnamon sugar pearls with toffee bits. I made both regular-sized scones and mini-scones. When these were in the oven, the house was filled with the perfume of cinnamon and sugar.

Boom. They turned out d-e-ricious! I'll definitely be making more scones from now on.
Posted by Christine at 13:10 No comments: