It was just one of those nights where we, were bored and hungry. Jimmy craved bubble tea and so we all went to pick some up at Bubblicity. After we ordered our bubble teas we decided to go to Yangtze for some food. The other choices were: pho, Yangtze, pizza, and pho. We left our bubble teas in the van and headed for Yangtze.

The 4 of us, Jimmy, Lucy, Richard, and I, sat down and a table and looked at the menu. We weren't starving, but we were hungry, so we just ordered my noodles with chow mein (instead of rice noodles) and a bunch of dim sum dishes. 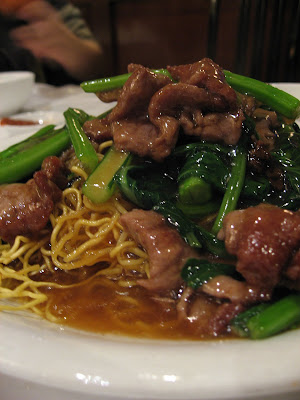 I didn't feel like the rice noodles because Yangtze sometimes makes it gross, and Richard felt like chow mein so we just asked for the change of noodles. The crunchy chow mein softened as it bathed in the sauce. So heavenly. The change was surprisingly good. 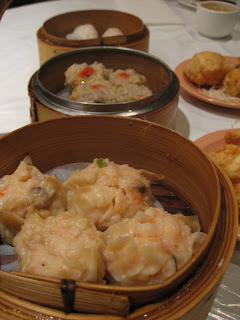 The dim sum dishes we ordered were: shrimp and pork siu mai, one haw gow, and two deep fried shrimp balls. The shrimp siu mai was good. The pork siu mai was pretty much a meat ball in a wonton skin. They seemed packed. It was different, but still good. I didn't have any haw gow, but I'm sure they were good. Finally, the deep fried shrimp balls were, as we hoped, crispy on the outside while the insides tasted of shrimp, green onions, soy sauce, and sriracha sauce (because I dipped them in my mixture of Yangtze's awesome soy sauce and hot sauce). 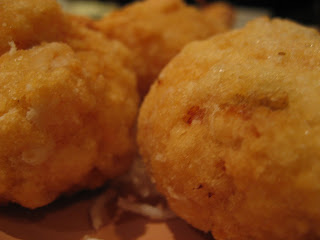 I said this before and I'll say it again; Yangtze has the best deep fried shrimp balls. If you like shrimp, I suggest you try this here.
After devouring our delicious second dinner we went back to the van and headed back home, where we finished our bubble teas. Looking at the time stamps on the pictures, it only took us less than 20 minutes to finish it all. I guess we were really hungry afterall. 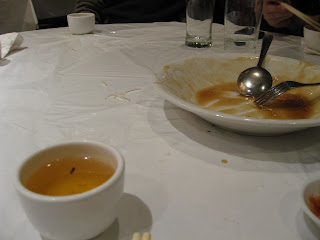 I thought I had posted this up, but I saved it as a draft. It took me almost a month to realize that. I changed the date of the post so it's the first post you see. If I didn't, it would be hidden under the dim sum post.


Pizza and hockey. You don't really need anything else - other then a couple of friends. The original plan was to grab some burgers before hand, at The Works, and then go to the hockey game. Things didn't work out. We were told to wait about 45mins for a table. The problem was that we wanted to be at the Scotiabank Place in about an hour. That left us no time to eat, so we chose to find another place to go to. We looked around and decided to have pizza at Gabriel Pizza. Here's a picture of their napkin. It sure does gets the appetite going, eh? 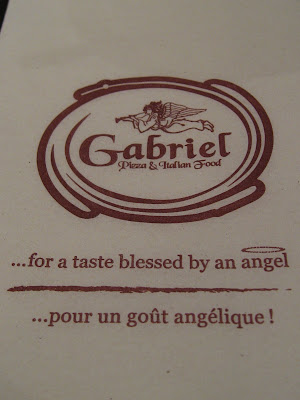 The first time I tried Gabriel's pizza was probably a year ago and it was very dissapointing. (It was also the last time I had it). I did get it delivered though. All I remember was that I wasn't impressed. It just didn't stand up to my Lorenzo's standards. I wondered what could've happend. Maybe I was one of the last houses on the delivery route? Maybe that's why the pizza wasn't that good that time...
This experience was totally different. I was expecting a really bad pizza to arrive but, to my amazement, the pizza was really good. We ordered two pizzas that night. The Orleans Favourite was split between BM, CM and I. 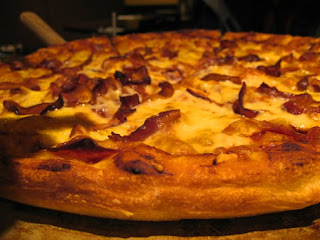 The other pizza was the Fajita pizza, which was shared among VN, KM and KM's mom. Wow, you can really tell how good the pizza is by just looking at these two pictures. The crust, the cheese, the toppings, the sauce... lol 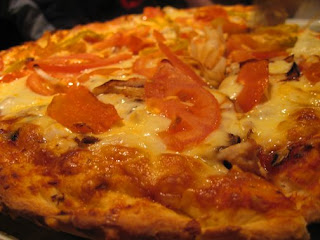 I didn't have any of the Fajita Pizza, but I can tell that it was good. As for the Orleans Favourite, it was very good. The dough was fluffy and chewy - just like a warm baguette out of the oven. The sauce was  spiced less than Lorenzo's sauce.

After we had our fill of yummy pizza, we headed over to the Scotiabank Place. We missed the warm up, as the zambonies were already out. Not long after we sat down, the Canadian and American anthems were sung and then the puck dropped. Here's a random picture of the game. Go Sens! 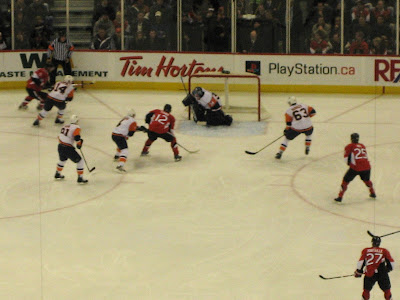 Man I have real good timing. That's pro. Heh, I'm just kidding. The play was actually stopped and it happend to be a commercial break, so I had time to look up and realize what a good picture it would make. I tried to zoom up and take another picture, but the puck was dropped and I was slow by a second. This picture is fine. Don't you agree? 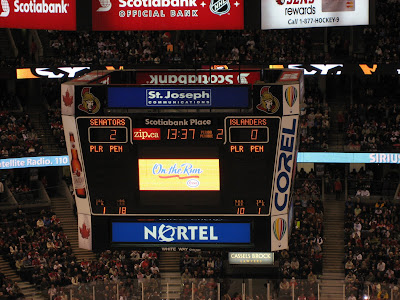 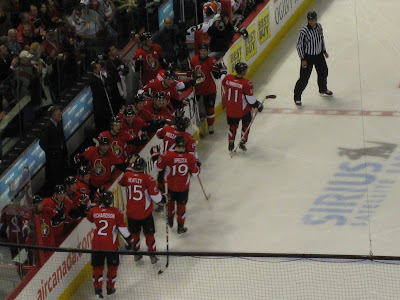 Here's another view of the ice. This is in the third period. The Sens are leading 5-1, as you can see on the jumbotron. 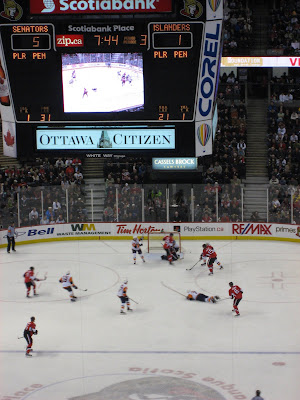 The Sens ended up winning 5-3 against the Islanders that night. One more goal and we could've gotten a free slice of pizza. It's too bad they changed the Pizza Pizza promotion last year. If the Sens score 6 goals and win, everyone with a ticket to that game could redeem their game day ticket for one free slice of cheese or pepperoni pizza.