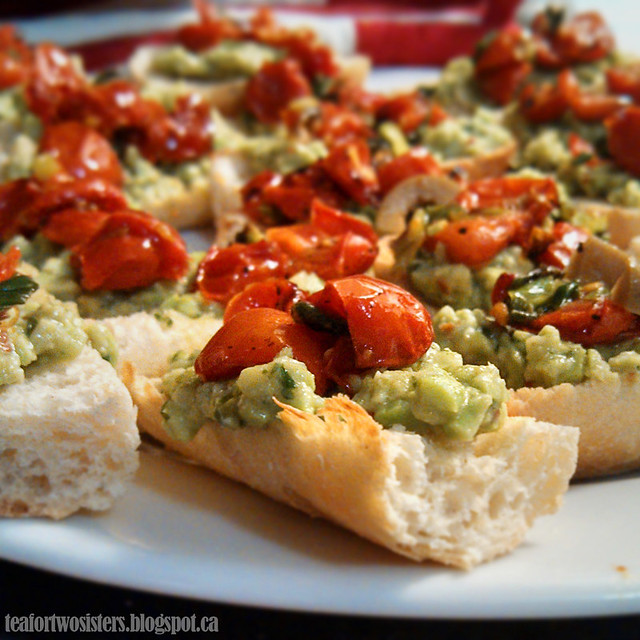 While going back through my Instagram wall, I noticed that I had forgotten to write about this beauty. Back before Christmas, Vanna found a recipe for edamame bruschetta that she wanted to try out for her Xmas party. The recipe that we skimmed through was Honest Vanilla's rendition. Since we didn't closely follow the recipe, I recommend that you head over there to see the accurate measurements.

Here's the gist of the ingredients we used: frozen shelled edamame (that happened to be on sale -- bonus!), a whole whack of mint leaves, some garlic cloves, olive oil, chili flakes, salt, and black pepper. To make it fancy, we added so me oven-roasted cherry tomatoes and some charred green onions. 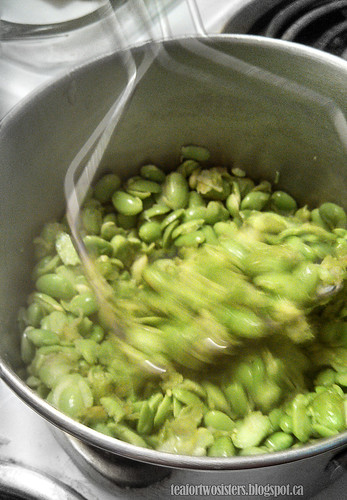 We started off by getting the edamame boiled. While that was doing it's thing, chopped mint was added to some chili flakes, olive oil, and minced garlic. 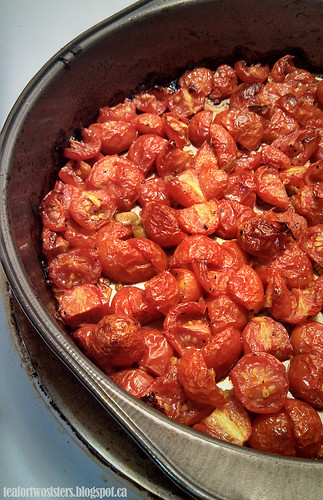 We also popped in some cherry tomatoes that were tossed in olive oil, and a bit of salt and black pepper. I also threw in a few cloves of garlic to make things interesting. Once the edamame was soft enough, we blended it until it had some texture and then seasoned it lightly with S&P. The final touch was charring some green onions in a bit of olive oil.

I'll be the first admit: me and vegetables don't get along very well. Despite our relationship, I loved these bruschetta! First off, you get the charred green onion character and then the sweetness of the tomatoes jumps in. Then the not-entirely-smooth edamame mix joins the party with the mint, followed by a hint of garlic and then the french bread. It was harmonious. This edamame bruschetta will definitely be making more appearances in the future. And whether you blend the edamame into a smoother mix or leave it with a bit of texture, I'm sure you'll enjoy this appetizer for lunch or even dinner. Hell, you could even turn this into a breakfast sandwich with some eggs!
Posted by Christine at 11:00