There are some great perks to living downtown and being able to walk to some lovely dining options is certainly one of them. VN and KN both live just outside of Toronto's core around the Ossington neighbourhood. Yup -- that's the same place as Libretto (aka the best Neapolitan pizza I've had), but that's not what I want to talk about now. I want to talk about this small shop, Pho Tien Thanh, which is just down the street from Libretto.

VN and I walked to the pho restaurant and smelled their lovely broth about five feet away from their door. Once we took a step inside, the fragrant smell of BBQ'd pork (thit nuong) filled our nostrils. At that point, I knew we were in for a tasty dinner. The smell just invoked all the good memories of having Mom's BBQ pork. Our winter this year was very long, to say the least, and it seems like it was years ago since I had her marinated pork. We luckily got there just as the dinner rush was finishing up and so we were seated immediately in the restaurant. 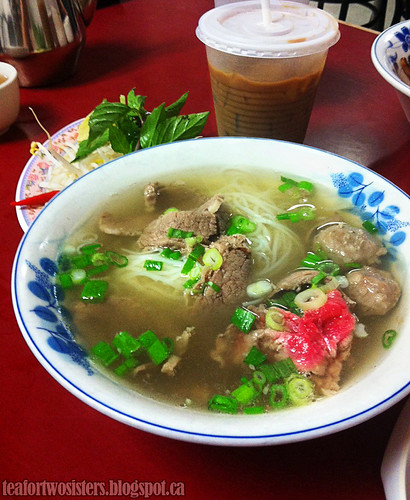 I couldn't decide if I wanted to deviate from ordering pho or actually change it up and try the bún with the thit nuong. Either way, I knew it was going to be tasty. In the end, I stuck to my guns and went with the small rare beef, beef balls and well-done beef pho. Once my bowl arrived, I took a sip of the soup. The aromatics were there without being overpowering. It had none of that strong cinnamon taste like most of the pho in Ottawa's Chinatown. The soup wasn't overly sweet either. Most of the beef was actually still uncooked, which is a huge bonus! You could order some rare beef on a plate and then add it into your soup yourself for $2. I think it's unnecessary in this case though. Only the thin slices that was touching the hot soup had cooked. When I separated the slices, they cooked gently in the soup. I was thrilled that the beef was actually rare by the time it arrived. 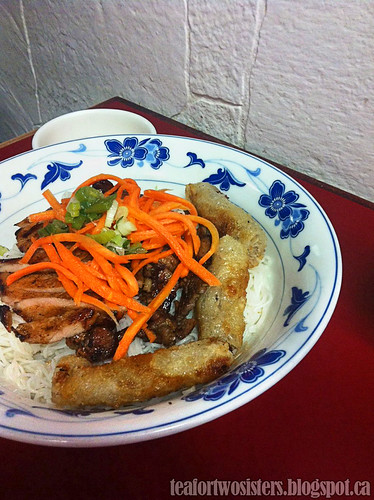 This was the bun thit nuong cha gio that VN had ordered. We both liked how their cha gio was made with rice paper. It's the legit stuff. (For those who don't know, VN is Vietnamese. Like I said. Legit stuff.)

We washed it down with some cooling beverages. A refreshing coconut water with young coconut meat for VN and an iced Vietnamese coffee for myself. In our excitement to order, we accidently ordered the coconut water instead of the coconut slush had originally wanted.

The Asian Pear told me that if I wanted to have the best pho, I'd have to choose between two different pho establishments in Toronto: one with the slippery fresh noodles or one with an outstanding broth. Pho Tien Thanh is the latter. I wonder how their other dishes taste. The cash-only restaurant is open for business from 11am to 10pm everyday, so you have no excuses not to try out this place. I know I'll be returning in the future.